Imaginations and dreams are formed by reading books. Through storytelling we can transport ourselves to other times, other places in the world and into somebody else’s daily experiences. We gain short insights into determination, power, goals and freedom. The following books all are inspirational and are all written by women who truly did it. They went out there and did not let the fear of the unknown and insecurity stop them. Instead they empowered themselves and through that they empower us all… Happy reading, I think it would suit all these books to be read in your tent at night while you are warm in your sleeping bag and can read just by the light of your headlamp…

There are no affiliate links or commercial rewards connected to this post.

When ex-headmistress Anne Mustoe gave up her job, bought a bike and took to the road, she couldn’t even mend a puncture. 12,000 miles and 15 months later, she was home. Her epic solo journey took her around the world, through Europe, India, the Far East and the United States.

From Thessaloniki to Uttar Pradesh, from Chumphon to Singapore, she faced downpours, blizzards and blistering deserts, political turmoil and amorous waiters – alternated with great kindness from strangers along the way. “A Bike Ride” is the first in the series of Anne Mustoe’s successful and inspiring travelogues.

This Road I Ride | Juliana Buhring

In December 2012, Juliana Buhring became the first woman to circumnavigate the world by bicycle. With only a few months of training and little sponsorship, support or money she left from Naples on 23 July 2012 to cycle the world.

Raised in a religious cult as a child, Juliana finally broke away as a young adult and found her soul mate – an explorer seeking the source of unmapped rivers in Africa. When he was killed by a crocodile, her world went dark. To escape her grief, she decided to set herself a challenge. Having never seriously ridden a bike, she set out to ride around the world.

Dare to Do: Taking on the planet by bike and boat | Sarah Outen

On 1 April 2011, rower and adventurer Sarah Outen set off in her kayak from Tower Bridge for France. Her aim was simple: to circle the globe entirely under her own steam – cycling, kayaking and rowing across Europe, Asia, the Pacific, North America, the Atlantic and eventually home. A year later, Sarah was plucked from the Pacific ocean amid tropical storm Mawar, her boat broken, her spirit even more so.

But that wasn’t the end. Despite ill health and depression, giving up was not an option. So Sarah set off once more to finish what she had started, becoming the first woman to row solo from Japan to Alaska, as well as the mid-Pacific from West to East.

The Wind In My Wheels | Josie Dew

As a young girl, Josie Dew developed an overpowering urge to travel. She also fell out of a fast-moving vehicle and, rather inconveniently, developed a lifelong aversion to cars. Along came her first bicycle, and she has never looked back. Four continents, thirty-six countries and eighty thousand miles worth of astounding adventures, eccentric characters, varied cultures and ever-enduring optimism are the result of her travels.

Strange incidents and bizarre circumstances punctuate her journeys: in Nepal she met a team of Frenchmen running from Paris to China, and a cyclist on his way from one Olympic Games to the next. In Udaipur she was greeted by everyone with the refrain ‘Hello Mr. Jamie Bond Octopussy filmed here’, whilst her view of post-Ceausescu Romania, a nation suffering and starving, affected her both physically and mentally.

Desert Snow is the story of one girl, one bike and 1,000 beers in Africa. By daring to follow a dream and not letting fear prevail, Helen cycled across the Sahara, Sahel and tropics of West Africa, paddled down the Niger River in a pirogue, hitch-hiked to Timbuktu and spent three months traversing the Congo, which she thought she may never leave…

A lot can change in 2 years, cycling 25,000km from England to Cape Town. So can nothing. Helen takes you with her on the journey through every high and low of her memories and misadventures. She describes a continent brimming with diversity that is both a world away from what she knows and yet not so different at all.

Wild: From Lost to Found on the Pacific Crest Trail | Cheryl Strayed

At twenty-two, Cheryl Strayed thought she had lost everything. In the wake of her mother’s death, her family scattered and her own marriage was soon destroyed. Four years later, with nothing more to lose, she made the most impulsive decision of her life.

With no experience or training, driven only by blind will, she would hike more than a thousand miles of the Pacific Crest Trail from the Mojave Desert through California and Oregon to Washington State—and she would do it alone. Told with suspense and style, sparkling with warmth and humor, Wild powerfully captures the terrors and pleasures of one young woman forging ahead against all odds on a journey that maddened, strengthened, and ultimately healed her.

Rebecca Rusch is one of the great endurance athletes of our time. Known today as the Queen of Pain for her perseverance as a relentlessly fast runner, paddler, and mountain bike racer, Rusch was a normal kid from Chicago who abandoned a predictable life for one of adventure.

In her new book Rusch to Glory: Adventure, Risk & Triumph on the Path Less Traveled, Rusch weaves her fascinating life’s story among the exotic locales and extreme conditions that forged an extraordinary athlete from ordinary roots.

West with the Night | Beryl Markham

If the first responsibility of a memoirist is to lead a life worth writing about, Markham succeeded beyond all measure. Born Beryl Clutterbuck in the middle of England, she and her father moved to Kenya when she was a girl, and she grew up with a zebra for a pet; horses for friends; baboons, lions, and gazelles for neighbors.

She made money by scouting elephants from a tiny plane. And she would spend most of the rest of her life in East Africa as an adventurer, a racehorse trainer, and an aviatrix―she became the first person to fly nonstop from Europe to America, the first woman to fly solo east to west across the Atlantic. Hers was indisputably a life full of adventure and beauty.

What Goes Around: A London Cycle Courier’s Story | Emily Chappell

Emily Chappell was never meant to be a cycle courier. She planned to earn her living using her mind rather than her legs. She thought it’d be a useful stopgap while searching for a ‘real’ job. Today, six years on, she’s still pedalling.

As she flies through the streets of the capital, dancing with the traffic, Chappell records the pain and pleasure-both mental and physical-of life on wheels: the hurtling, dangerous missions; the ebb and flow of seasonal work; the moments of fear and freedom, anger and exhaustion; the camaraderie of the courier tribe and its idiosyncratic characters; the conflict and harmony between bicycle and road, body and mind.

‘I experienced that sinking feeling you get when you know you have conned yourself into doing something difficult and there’s no going back.’ So begins Robyn Davidson’s perilous journey across 1,700 miles of hostile Australian desert to the sea with only four camels and a dog for company.

Enduring sweltering heat, fending off poisonous snakes and lecherous men, chasing her camels when they get skittish and nursing them when they are injured, Davidson emerges as an extraordinarily courageous heroine driven by a love of Australia’s landscape, an empathy for its indigenous people, and a willingness to cast away the trappings of her former identity.

The hungry cycle tourist’s guide to slowing down, eating well, and savoring life on the open road.

Buying, cooking and eating delicious foods while traveling the world on a bicycle doesn’t have to be a painful or difficult task. In fact, cooking delicious meals with local foods found along your travels can be both easy and downright enjoyable!

In her delightfully photographed and well-written bicycle touring cookbook, Tara Alan, shares her food and camp cooking secrets in a fast, fun and entertaining manner.

Full Tilt: Ireland to India with a Bicycle | Dervla Murphy

When Dervla Murphy was ten, she was given a bicycle and an atlas, and within days she was secretly planning a trip to India. At the age of thirty-one, in 1963, she finally set off and this book is based on the daily diary she kept while riding through Persia, Afghanistan and over the Himalayas to Pakistan and India.

A lone woman on a bicycle (with a revolver in her trouser pocket) was an almost unknown occurrence and a focus of enormous interest wherever she went. Undaunted by snow in alarming quantities, and using her .25 pistol on starving wolves in Bulgaria and to scare lecherous Kurds in Persia, her resourcefulness and the blind eye she turned to personal danger and extreme discomfort were remarkable.

What would it feel like to be out there alone in that empty vastness? Just before midnight on 24 November 2011, Felicity is left completely alone on the coast of Antarctica. The isolation is instant and devastating. Only three people in the world have crossed Antarctica alone. The first two were men and both Norwegian. At the age of 34, British woman Felicity Aston became the third. Unlike her predecessors, she didn’t use kites or parasails to assist her.

Within days, frozen into her facemask and reflecting on what had drawn her to such a place, she was battling desperate weather as she towed her heavy sledges. This gripping and inspirational account of personal endurance shows what you can achieve when you grit your teeth and decide just to get through today in one piece.

In 2010, Sarah Marquis embarked on a perilous journey: alone and on foot, she walked ten thousand miles across the Gobi Desert, from Siberia, through Thailand, to the Australian outback. Relying on hunting and her own wits, she traversed fever-haunted jungles and scorching deserts, braved harassment from drug dealers, the Mafia, and camp raids from thieves on horseback.

Surviving dehydration, dengue fever delirium and crippling infection, Sarah experienced a raw and spiritual communion after three years of walking at the base of a tree in the plains of Australia. Through an inspirational journey, Wild by Nature explores what it is to adventure as a woman in the most dangerous of circumstances, and what it is to be truly alone in the wild.

Be Brave, Be Strong | Jill Homer

Jill is an unassuming recreational cyclist who has about as much in common with Lance Armstrong as she does with Michael Jordan. But despite her perceived athletic mediocrity, the newspaper editor from Alaska harbors an outlandish ambition: the “world’s toughest mountain bike race,” a 2,740-mile journey from Canada to Mexico along the rugged spine of the Rocky Mountains.

Serious frostbite proves to only be the beginning in a series of setbacks that threaten to change her dream from outlandish to impossible. But, as Jill explains to a skeptical friend, “The fact that something’s impossible has never been a good reason not to try.” 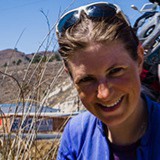